Sensei Wicks and Sensei Corrigan arrived in Toronto on Thurs, Oct 31. The first session was Friday at 6:30pm giving both Senseis time to adjust and perhaps relax a bit before the training began.

The next night came quickly and training began. After warmups, Sensei Wicks focused initially on basics, beginning with Kette Junzuki and Kette gyakuzuki. It seemed like Sensei made us do them a hundred times before we moved on. We then worked on black belt renraku waza ipponme (2013 syllabus). It was nice to see this done by Sensei as it gave me clearer insight on the initial evasions that I’ve had trouble with in the past. Next on the agenda were Sanbons, particularly Jodan 2 and Maegeri 3. I certainly had a few things that needed correction regarding these sanbons, however, overall, the surprises were minimal. Next we work on Nihanchi, to which we did to Senseis count and explanation at least 20 times. The evening was capped off with pleasurable comradery at Jack Astors ( which resulted in a picture of Sensei on Facebook! )

The second day had two 2-hour sessions filled with many facets of the WIKF curriculum. Initially we warmed with basics revolving around the no tsukomis.  Apparently I need to make my Taiji Dachi stance needed to be a little more square – not doing so is lazy! ( Yes Sensei! ). Next up was black belt renraku waza nihonme. One of Sensei Wicks’ main focuses during the explanation of this combo was on Zanshin, and why we were doing particular moves. The second Saturday session had us focusing on some of the higher kumites including Kihons and Tanto Dori. The Sandan candidates worked on Tanto 4/9, kihon 9/10. This session ended with work on Bassai.

Sensei Corrigan worked with the Brown Belts on Seishan.

The first and only open training was Sunday morning. We had a large variety of belts all training the new 2014 Dan renraku waza. We must have done them 2 dozen times each. Again, Sensei Wicks focused on awareness of the moves and being prepared for anything. We also did some agility drills involving evasion without blocks. Something I will be definitely taking back to ECW. Some of us have a couple of bumps and bruises to show for our efforts from these drills. Later on in the afternoon we continued with partner work focusing on Tanto Dori, Tachi Dori, and Idori.  Sensei Wicks worked with the Black Belts and Sensei Corrigan continued to work with the Brown Belts.

Gradings began on time Sunday afternoon. There were moments of panic as some students fought to scrub the new combos from their minds and remember the old combos. Quickly we were arranged and ran through our basics and combos, then our partner work,  next Kata and finally fighting. Having 6 candidates up at a time, Sensei’s critical eye caught all of our mistakes readily. The grading lasted approximately 2 and a bit hours with a further hour of telling us just what we needed to correct in order to improve.

All in all, a humbling, insightful experience. To which I hope to experience again next year – without the grading. 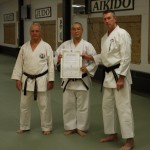 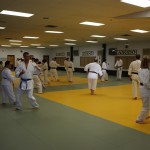 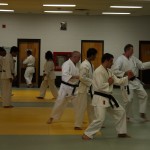 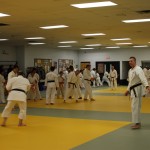 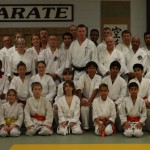 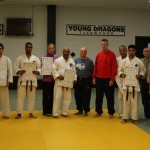 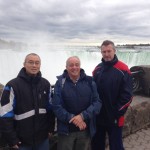