Just after the Canadian Thanksgiving this year, Sensei John Wicks came to the Toronto area to advance our understanding of the Wado Curriculum. Sensei arrived with the Chief Instructor of Canada, Ken Corrigan, Monday afternoon.

The first seminar was on Tuesday evening. After a brief warmup, Sensei opened the evening with Kata. One of the points addressed over and over was Ikita Kata, keeping our Kata alive and real, initially shown at the start of a Kata. Pinan Nidan was the first Kata we covered. We reviewed sets, proper foot placement, and elimination of extra movement for blocks. The next Kata was Kushanku. Proper technique was reviewed by constant execution of the sets under the watchful eye of Sensei. Next up was partner work, specifically Kihon 4 and Tanto Dori 2. Kihon 4 resulted in many a tricep bruise the next day.

The next session was the Wednesday open evening. Sempai Mark Phillip warmed us up. The warmup was greatly appreciated, as we spent some of the night doing a mirror-your-partner kumite drill which had most of us exhausted after the 3rd or 4th round (pretty sure we did about 10 rounds ). I had the benefit of working with Sensei Michael Ham for these drills, and I think he took it easy on me. After Kumite, we worked on Pinan Godan. A lot of corrections to ensure the correct teaching of this Kata to pass along to our respective dojos. Returning next to partner work, Sensei Wicks reviewed Kihon 9 and Tanto Dori 5. I had not received training on this Tanto before, and it certainly is one of the more exciting Tantos. Kihon 9, which looks simple when observing, is a very difficult technique to master.

Thursday involved not only the standard evening training, but also a private training session. During the private training, we began with the Dan combos. Probably never heard, “No, wrong!” so many times – seems I need some work on my foot-sweeps. Wanshu was the Kata of choice for the private session. Many small movements in Wanshu that must be practiced over and over again. Sensei made us demonstrate the Kata individually afterwards. Finally, Kihon 8 was practiced at the end of the session.

Thursday evening we covered Jitte. We reviewed this many times, particularly the first couple sets. The rest of the night we did more partner work. Initially we covered Tanto Dori 3 and 7. Tanto Dori 7 was enlightening. I had remembered it differently, than what was actually taught. The shoulder movement in 7 is very similar to the movement in Kihon 9. Tachi Dori 4 was next on the agenda. This was new material for me having little training with the swords. As Sensei reminded me over and over, I need to buy his DVD – the process is underway. 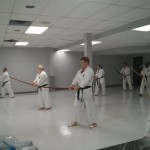 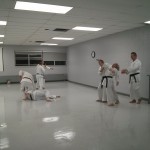 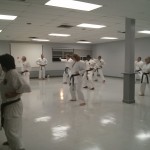 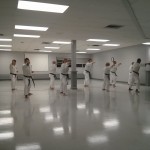