On June 20 Sensei Ken Corrigan arrived in Nova Scotia to begin the Canada summer course at East Coast Wado. Arriving in the evening, though there were no classes on the first night, we took Sensei to JF’s place for the obligatory sociable and story telling. Luckily for us, due to the long day this lasted, oh, only till about 1230 am. It was important to show Sensei some good old down-east Nova Scotia hospitality.

Because the first session wasn’t until later in the day, Sensei’s first day in Nova Scotia consisted of a tour of the Halifax waterfront and visits to various (non-alcoholic) establishments with ECW-er’s Kevin Jones (me), Kevin Seyffert, and JF. We enjoyed the day, passing many a story and planning the sessions to come, as there was a lot of material to cover with such a range of students attending.

The first session was Thursday evening. After a brief warm up, we dove right into the kata shared across many belts training that night – Seishan. Our legs were getting tired gripping the various stances. Afterwards, we reviewed Nihanchi and continued on with a Chinto/Bassai intensive further in the evening. ECW admittedly had a little trouble with Naihanchi, as Sensei stressed the finer points, having us do it over and over until we got it right. We laugh in hindsight at the struggle: Senpai Helen the most, occasionally being verbal yet gentle (!) about it, as she forced the class to into many glorious repetitions. It’s togetherness for ECW – if one struggles, we all benefit from doing it again! Eventually Sensei separated me out from the group to work on Jion, as he foresaw the amount of work required to untangle the various knots in Naihanchi. While I worked on Jion, the others also touched on Chinto. Eventually this session ended approximately 30 mins late to help me with Jion near the end. Running late ended up being a very necessary and welcome theme throughout the weekend.

The second session happened Friday night, beginning the road of covering nearly all the WIKF partner work. We were joined at this point by Sensei Matthew Sullivan, a karate brother and Kevin’s training partner. Sanbon Gumite were first to be covered. Working down the list, Sensei would spend time on a sanbon if a student had it on their grading. Out of the 12, only three or four were not covered in detail, eventually landing a solid amount of time on the majority of techniques. Eventually we progressed into Ohyo Gumite, again focusing on grading material only. We still managed to cover most of the them, as it seemed Eve had every single one on her grading (and for this we are grateful and say Thank You!). Each time, Sensei would graciously offer to demonstrate the full crux of the technique on myself (who also said Thank You). The students occasionally would ask for additional demonstrations to ensure no details were missed, especially if the finishing blow looked painful.

Saturday we had two training sessions. We started in on the Kihon Gumite, focusing mainly on 1,2,4,5,6,7 and 10. Each Kihon was reviewed in detail as we learned the proper counters and exits. A fair amount of time was spent on Kihon 5 and the various grabs, arm manipulation, and knee placement. I am thankful that Matthew had excellent break falls, as he was thrown many times as Kevin struggled to learn it. Once we finished with the Kihon gumite, we advanced into Tanto-dori and Tachi-dori. The entire class got to learn my tachi-dori, a splendid technical treat, as we do not often receive higher instruction in this advanced material. We ended Saturday evening with Niseishi.

Finally Sunday! We began the day with a taste of the Little Dragons, doing various games and drills to keep them entertained. Afterwards, Sensei had to sign many a belt and had many pictures taken with him. The smiles were aplenty. After the Dragons, we had an open Kyu class where Sensei sharpened up our younger crew with various basics and Pinan Yondan (to grading adults were invited to this party) for what seemed about 100 times (“Again! Mistake!”). The students and parents got to see the instructors sweating up a storm trying to perfect their technique ( or not so much as Sensei would point out ). A parent was overheard to remark to an adult student – “Is it as difficult as it looks?” In 30-degree whether with a heavyweight gi and east coast humidity, no, it was actually worse!

With a small break for lunch after the open class, we began the grading. It was time to demonstrate everything we had learned and had been working for over the past few months. The gradings lasted 3.5 hours, putting three students up at a time for basics and combos and occasionally two at a time for kata. The partner-work seemed to go on forever, as many had to be covered across all ranks. Jiyu Kumite resulted in some bumps and bruises, but overall we managed to get through it in the end, smiling at our successes and noting what we needed to improve upon individually and as a club. In the end, while everyone had things to work on, we were rewarded our next rank, all of us passing.

East Coast Wado humbly thanks the Chief Instructor of Canada for his visit to the East Coast. We appreciate him taking the time to further our practice in WIKF Karate. A grand time – if a hard, yet enjoyable time – was had by all. We look forward to many more visits in the future. 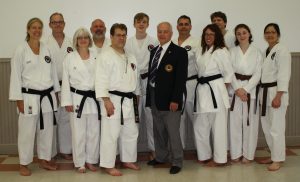 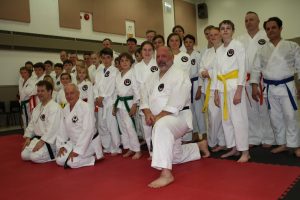 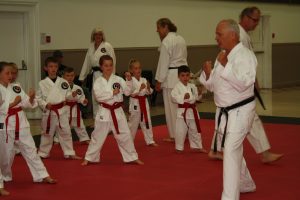 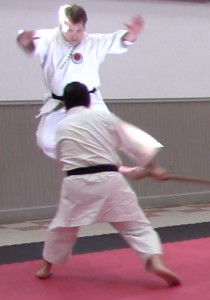